I was reading about Bob Dylan yesterday, in a summary of his music career written by Scott Marshall, in a little book titled Spiritual Journeys –How faith has influenced twelve music icons. I realised it was his birthday. Bob Dylan turned  70 years old on the 24th May. What has always been influential for me, besides Dylan’s amazing song writing and music, is his conviction to what he sees as his truth. He has never shied away from his own beliefs which are boldly written in his songs.

Music has always been high on my list of things that inspire and watching Buffy Sainte- Maree, another 70 year old performer on stage at the Byron Blues Fest, had a huge impact. There were quite a few musicians over 60 yrs of age. These performers had strong convictions and a lifetime’s work to draw on.

Creative people who have strong traits such as a love of freedom, mystery, empathy  and beauty, be it subtle or shouted about, and who combine these with endurance, courage, ingenuity and self trust are always  genuine in their pursuit for the real thing. Not satisfied with the mundane they do what it takes to achieve their goals honestly.

Getting to the truths of any art form has never been easy, and Bob Dylan has many critics, yet he remains an icon. Age should not be a deterrent, nor criticism, nor lack of support. These can become poor excuses for not creating what is in the heart. Fear can stop the greatest idea as can our concerns for what others might say.  Being aware of this is the first step, from then on it can only be upwards.

The painting below is of  a view from my older art studio. It was not a conscious image that I painted  as the tree appeared unexpectantly. I realised it was the tree that had grown from a  sapling by the nearby dam during the drought. It was a real survivor.  This painting is currently on show at Moreton Art Awards at Pine Rivers Art Gallery and Community Centre until the 29th May 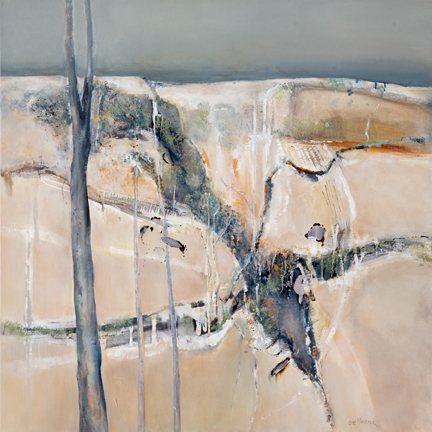