The hiatus between Christmas and New Year is a great time to pause and reflect on the past year and also on our dreams and aspirations for 2012.  I was encouraged to put my New Years resolutions into writing by one of our local papers, and it was an interesting exercise. Because we live in such unpredictable times, with so many crazy decisions being made by those in power, I wanted to say a lot more, but in only a few paragraphs it wasn’t possible. Personally I would like use 2012 to get back to basics and work fruitfully with a lot more fresh ideas.  Having just come back from a few days at the Woodford Folk Festival  I am even more adamant that having a ferocious curiosity for life, and a defined purpose for living, to create a better world through art, is the only way to advance.

I witnessed history in the making in the performances of some of the talented young musicians like Joe Robinson, who won Australia‘s Got Talent in 2008 at the age of 16.  He hasn’t wasted a single day since, living in Nashville to play with the greats. His guitar playing and singing were indescribably beautiful, even the frenzied electric guitar solo at the end of the show. I heard veteran and distinguished performers talk, such as singer songwriter, artist, actor and academy award winner Buffy St Marie, who has made a difference to the way we think about the indigenous peoples of the world.  She said she didn’t want to follow the crowd but do her own thing and didn’t think she would make it in her career because at times she stepped way outside what was expected in her folk genre. It was only after some of her love songs were recorded by the greats in the industry that she stepped up to ownership of them.

In the light of all this wisdom my first resolution for 2012 is to see everyday as a gift and not waste a single one so I hope to be more forgiving and generous and also finish a third art book that’s been incubating. My second is to get my physical body in shape: be fitter, eat better, loose a little weight and walk more to explore nature. My third resolution is to crack wide open the ideas, research, and techniques I have been exploring to reintroduce printmaking processes using my love of photographing wild places. I am searching for the right way to display these prints alongside my painting to extend what I already do. I have decided to start our small and let it grow.

How will all this make a difference to the world, well I don’t know at this stage. However I have a joy of sharing, and giving inspiration to others and if we all share random acts of kindness and assist one other person in need in 2012, we will have made a difference. To the lovely young woman who assisted me across the muddy patch I encountered outside the Bizarre tent at Woodford, you made a difference. It was not that I would have suffered greatly without your help, it was just because you wanted to help and did, that gave me such pleasure.

My first  published book Gleaner or Gladiator: The Struggle to Create will soon be out of print. It is still available, along with Invisible Realities : Finding the Hidden Dimensions in Art at  around 70 venues in Australia and N.Z. I will need to make a decision soon on its future. Should it become an e-book?  The next book in the series is still forming in my mind and my biggest resolution in 2012 it to draw it, or should I say write it, to completion.  I wish everyone a peaceful, prosperous and creative New Year. 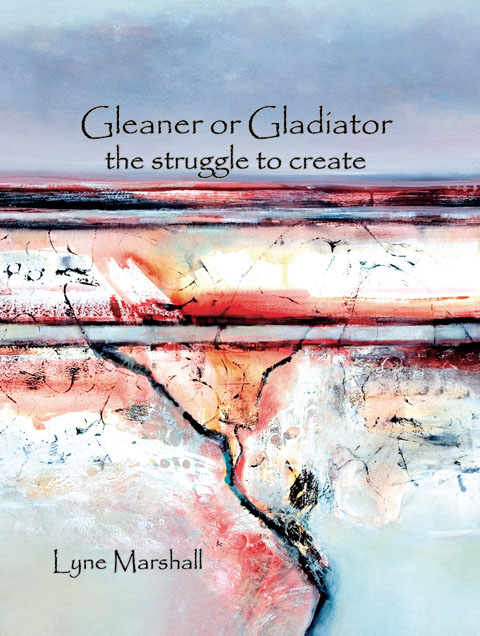 Gleaner or Gladiator: The struggle to create